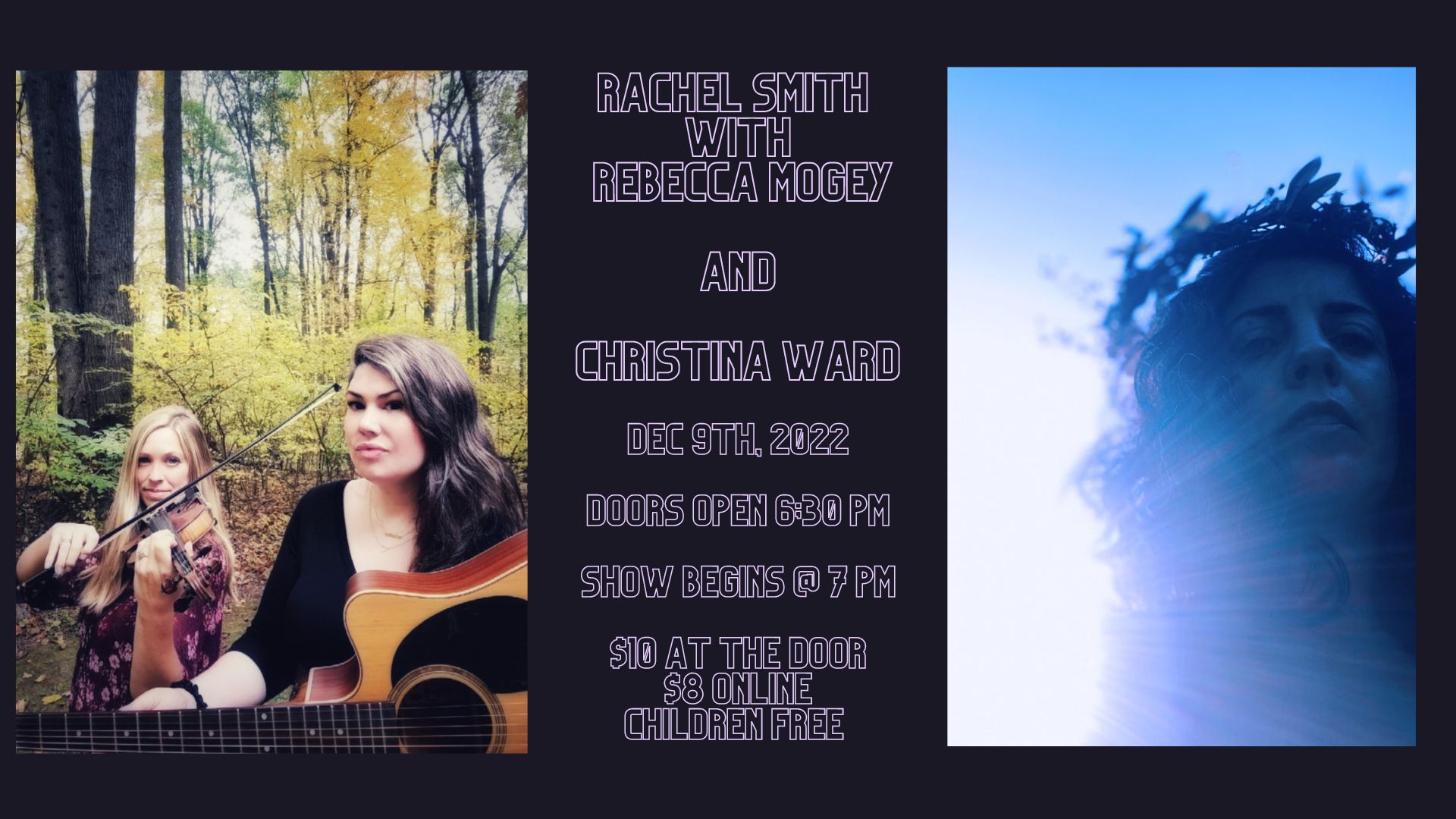 CHRISTINA WARD is a musician and producer from the Philadelphia area. Her songwriting and arrangements guide the listener through a forest of drum machines, synthesizers, & effects that create an intimate & immersive space. She lives mostly in a little river town & spins her writing about existential dread into sad songs. Her album, Calendar, will be released on October 21st via Mint 400 Records.

RACHEL SMITH will be making her debut with a comprehensive list of songs from the past 15 years. She will be backed by Rebecca Mogey, a prolific multi-instrumentalist. Read a bit about them:

RACHEL SMITH was born in Englewood, New Jersey. Early on she had an immediate love for music. Her father, Al Smith, played the Beatles often around the house and on long truck rides where they sang songs together. As a child she wrote her first songs at six years old. That same year she recorded her first cover, “Dream” by the Everly Brothers. In middle school, Rachel began playing drums and writing poetry. She attended regular poetry readings at coffee shops and open mics, using writing as a way to provide catharsis and expression. Rachel taught herself to play guitar at 23 years old and began writing songs and played at the former Wildflower cafe in Southside Bethlehem where she met Rebecca Mogey.

In 2011 she graduated East Stroudsburg University with a degree in Elementary and Special Education. Rachel is also a multimedia stained glass mosaic artist and is passionate about the culinary arts. She resides on South Mountain with her fiance, Bill Mackey, their beloved dog, and two cats. Rachel hopes to share empowerment, optimism and authenticity through her lived lyrics, music, and art.

REBECCA MOGEY (Waine) was born in Bryn Mawr, PA. Becky was exposed to Southern music through her father, who was born in the South and played in Bluegrass and Rock bands. Her mother, from the Netherlands, brought Classical influences to her. Her mother was a staple and supportive with not giving up. She was also a part of a Classical chamber group conducted by the late Raymond Montoni.

She began playing violin at the age of 9, classical and contemporary music on the piano at age 4, composing pieces herself, the guitar at age 12 and mandolin at age 15.

Becky played in the orchestra with Will Mogey as a child, who she went on to marry later in life. Becky went to Moravian University where she minored in Music while majoring in Developmental Psychology. At Moravian, Becky studied under Linda Kistler and other prominent music professors that pushed her in violin. Becky also studied the drums and took part in Jazz Fusion groups in college. Becky continued to play different instruments (especially violin) in multiple projects and bands in the Bethlehem area. One artist who she met was Rachel Smith in 2004, when their musical journey began.

Becky then moved to Nashville, TN, playing with different artists while starting a Celtic band called “The Get Reels” with her husband, Will Mogey. Becky had two daughters and recently moved back to Pennsylvania. She continues to play with Rachel Smith and focuses on empowering others through music while writing her own indie music. Becky is also a behavior therapist for children with special needs and dreams of starting a music therapy or therapy clinic for children with special needs in the future.