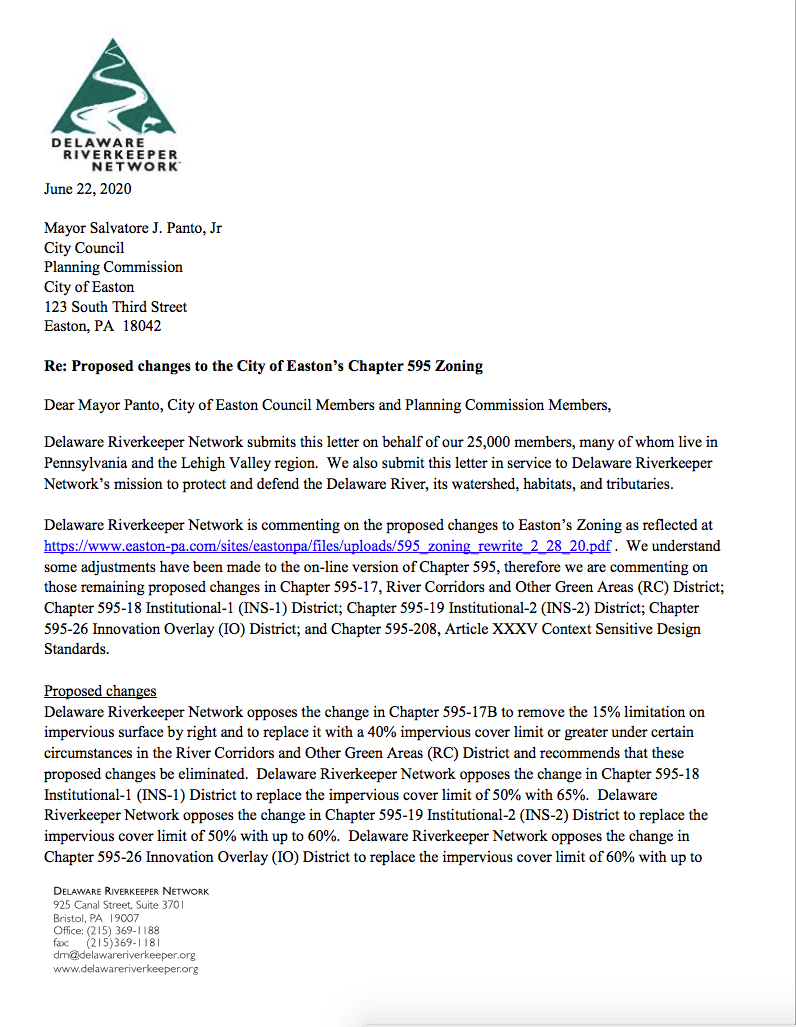 Re: Proposed changes to the City of Easton’s Chapter 595 Zoning

75%. Delaware Riverkeeper Network opposes the change in Chapter 595-208 Article XXXV Context Sensitive Design Standards to replace the maximum lot and building coverage limit of 40% with up to 50% for residential uses in the West Ward, South Side and College Hill. We consider impervious surface coverage to be one of the most critical standards for land development and advocate for strict impervious cover limits, as detailed in this letter.

There are two important and Easton-specific areas of impact that impervious cover directly influences: water quality and flooding. Well-established science has verified that the percent of impervious cover on land is related to the water quality of the receiving waterway and the volume, timing and rate of stormwater runoff.

In the 1990’s research began that made this connection.1 Since then, research and data has proven the findings that as the percentage of impervious cover increases, so does pollution and surface water quality degradation2 and increased flood flows. Both of these issues are germane to Easton, particularly considering the City’s location on the Delaware River at the confluence with the Lehigh River and the historic and continuing vulnerability of Easton to flooding and flood damages.

According to one of the many academic studies, “Urban pollutant loads in aquatic systems are directly related to watershed imperviousness. It is generally found that stream degradation occurs at low levels of imperviousness (about 10 to 15%), where sensitive stream elements are lost from the system.3 The study continued to explain, “There is a second threshold at around 25 to 30% impervious cover, where most indicators of stream quality change to a poor condition”, referring to an earlier Schueler report.4

Delaware Riverkeeper Network advocates for impervious cover limits less than 10%, considering that water quality shows degradation starting at 10-15%. Studies show that degradation of streams and wetlands begins when impervious surface reaches 10%.5 At 25% imperviousness, fish die. At 30% coverage, the degradation is severe6 and requires comprehensive stream health restoration in order to revive life in the stream. To allow greater amounts of impervious coverage than the 15% and greater amounts in the various sections in the current regulation, is unjustified by current science and flies in the face of modern land use planning policy.

It is essential that Easton’s land use planning recognize the importance of limiting impervious cover to protect the water quality of the Delaware River, the Lehigh River, and the Bushkill Creek. Nonpoint source pollution occurs when pollution mixes with stormwater runoff, polluting a waterway or, in some cases, groundwater. The nonpoint source pollution that is generated by stormwater runoff is persistent and invasive. Stormwater washes a myriad of pollutants from urban/suburban areas during a rain including: sediment, soils, nutrients (such as phosphorus and nitrogen), copper, zinc, and other heavy metals (including lead), fecal coliform, bacteria, hydrocarbons-oils-greases, atmospheric deposition, vehicle emissions, pavement deterioration, tire and brake pad dust, pet waste, chemicals and fertilizers with mixing agents and surfactants used in lawn care, road salts and de-icing chemicals and their agents, household chemicals, organic and inorganic debris and trash.

The effects of these pollutants include: sedimentation (or silting in) of streams and in-stream habitats; thermal stress; nutrient enrichment; oxygen depletion in surface water; toxic contamination of water supplies, aquatic life, and the food chain; pathogenic contamination of water supplies, fish, wildlife, and domestic animals.7 The living ecosystems, the flora and fauna that are bound up with the life of the stream, all suffer from this pollution. High storm flows also carry adverse environmental impacts such as erosion, sedimentation, stream destabilization, hydrologic changes in natural flows, and other negative impacts to the receiving waterways. 8

Enormous efforts have been made by the U.S. Environmental Protection Agency (EPA) to get a grip on these sources of pollution over the last 20 years, codified in 2005-2006 when EPA’s National Pollution Discharge Elimination System program adopted Phase 2, addressing nonpoint source pollution nationwide through stormwater management. Nonpoint source pollution was recognized by EPA as the stubborn source that was preventing many of the nation’s waterways from attaining the basic goals of the Federal Clean Water Act: to make all waterways fishable and swimmable and to provide clean drinking water to all people.

The EPA definition of nonpoint source pollution (NPS) is: “Pollutants from any diffuse source. NPS pollution is caused by rainfall or snowmelt moving over and through then ground. As the runoff moves, it picks up and carries away natural and human-made pollutants, finally depositing them into lakes, rivers, wetlands, coastal waters, and even our underground sources of drinking water.”9 Typically, nonpoint source pollution, carried by stormwater runoff, contains sediments, suspended solids, nutrients, heavy metals, pathogens, toxins, oxygen-demanding substances (organic material) and floatables, according to EPA. 10

These pollutants are serious problems for local and downstream water supply, for fish and aquatic life health, for recreational uses, which rely on a healthy, clean river, and for the quality of life for the river communities of Easton, Phillipsburg and all downstream communities. Sound planning is accomplished on a watershed basis with each neighboring community considering its own needs and their neighbors. As we know, we all live downstream of someone else, giving us responsibility for what we do, even as we are impacted by what others do upstream. This principle is borne out by the federal recognition of the Delaware River as a Wild and Scenic River because of its “outstanding values”, including those of the river at Easton, and the adoption of Special Protection Waters regulations by the Delaware River Basin Commission to give teeth to the Congressional designation by setting water quality standards that prevent degradation of the “exceptional water quality” of this part of the Delaware. This protects Easton’s water supply because upriver discharges – both point and nonpoint – must meet strict standards. In turn, Easton needs to take part in the watershed approach to land use planning through its zoning ordinance by employing the most up to date protective standards for the benefit of Easton and its neighboring communities and all those downstream.

Impervious surfaces increase stormwater runoff and resulting flooding. The rainfall that was once captured and transferred through the natural hydrologic cycle on naturally vegetated land cover now washes from the land as damaging stormwater runoff. Flooding is a natural phenomenon and cannot be stopped by stormwater controls or structural measures such as dams and levees. However, many of the storms today that cause damages swell to greater volumes and faster flows due to the increased runoff from impervious land, increasing the ferocity of what used to be smaller, less damaging events. In the Midwestern United States, recorded data shows that current discharges to streams may be 200 to 400 times greater than historic levels.11 One study estimated that because of the increase in impervious cover in a watershed, a flood event that should be expected once in 100 years could occur once every 5 years when the impervious cover reaches 65%.12

Limiting impervious surfaces allows precipitation to soak into the land and be taken up by vegetation, reducing stormwater runoff volume, velocity and frequency. This protects public safety and reduces flood damages. If the land is not covered with an impervious surface, and best management practices (BMPs) such as natural vegetation or natural infiltration systems are employed to capture and recharge stormwater to groundwater, infiltration that retains the runoff from a 2-inch storm (1 yr. storm event=2.5 in. rainfall in 24 hrs.) can reduce the annual storm runoff volume by 95%.13 This is not only effective at reducing storm flows but is also economical through prevention, the best investment. Retaining the smaller, more frequent storms (95% of all rainfall in the region is delivered in storms smaller than the 2-yr. storm) restores the bulk of the rainfall to the natural hydrologic cycle and keeps it out of the stream or river where it causes flooding and increases flood damages.14

In “Bucks County Flood Recovery and Mitigation Study” prepared by the Delaware Valley Regional Planning Commission DVRPC) for the U.S. Department of Commerce, the impervious coverage that has accompanied watershed and floodplain development in central and lower Bucks County communities (sub-basin 2, DR) is identified as the cause of increased flood frequency and velocity in the Delaware River.19 In 1996, storms and weather conditions led to flood conditions exacerbated by floodplain disturbance, channelization of small feeder creeks, increased stormwater runoff, structures in flood hazard areas, and lack of adequate stormwater controls in the contributing watersheds. In their study, DVRPC recommends 16 policies for floodplain management by municipalities. The policies favor nonstructural measures that focus on better floodplain management and land use regulations that keep people out of the floodplain and restore stream corridors to natural conditions. The report also recommends that wetlands, the 100-year floodplain, and the flood fringe that buffers the floodplain, should be off-limits to development; and that all development in the watershed should limit impervious cover and increase stormwater infiltration practices so that the amount of total run-off can be reduced, thereby decreasing stormwater and flood flows. This local study illustrates the awareness among regulators that better stormwater controls with reduced impervious cover will protect floodplains and reduce flood damages.

Pennsylvania’s Best Management Practices Manual for Stormwater is in use by all developers and local governments in the Commonwealth. The Manual explains the connection between flooding and impervious cover (emphasis added):

“Pennsylvania is the most flood prone state in the country. It has experienced several serious and sometimes devastating floods during the past century, often because of tropical storms and hurricanes, and heavy rainfall on an existing snow pack. To a large extent, the flooding that results from such extreme storms and hurricanes occurs naturally and will continue to occur. Stormwater management cannot eliminate flooding during such severe rainfall events.

In many watersheds throughout the state, flooding problems from rain events, including the smaller storms, have increased over time due to changes in land use and ineffective stormwater management. This additional flooding is a result of an increased volume of stormwater runoff being discharged throughout the watershed. This increase in stormwater volume is the direct result of more extensive impervious surface areas, combined with substantial tracts of natural landscape being converted to lawns on highly compacted soil or agricultural activities.”15

We thank you for your consideration of these comments on this crucial issue facing the City of Easton. 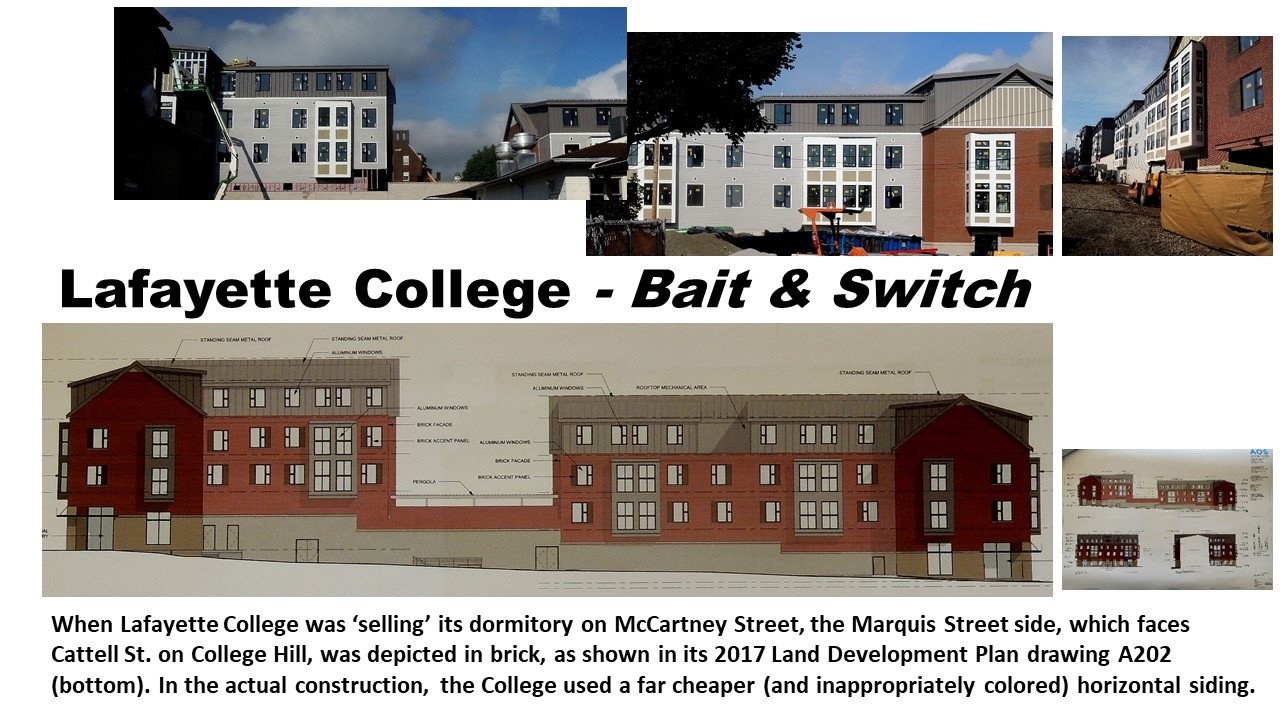 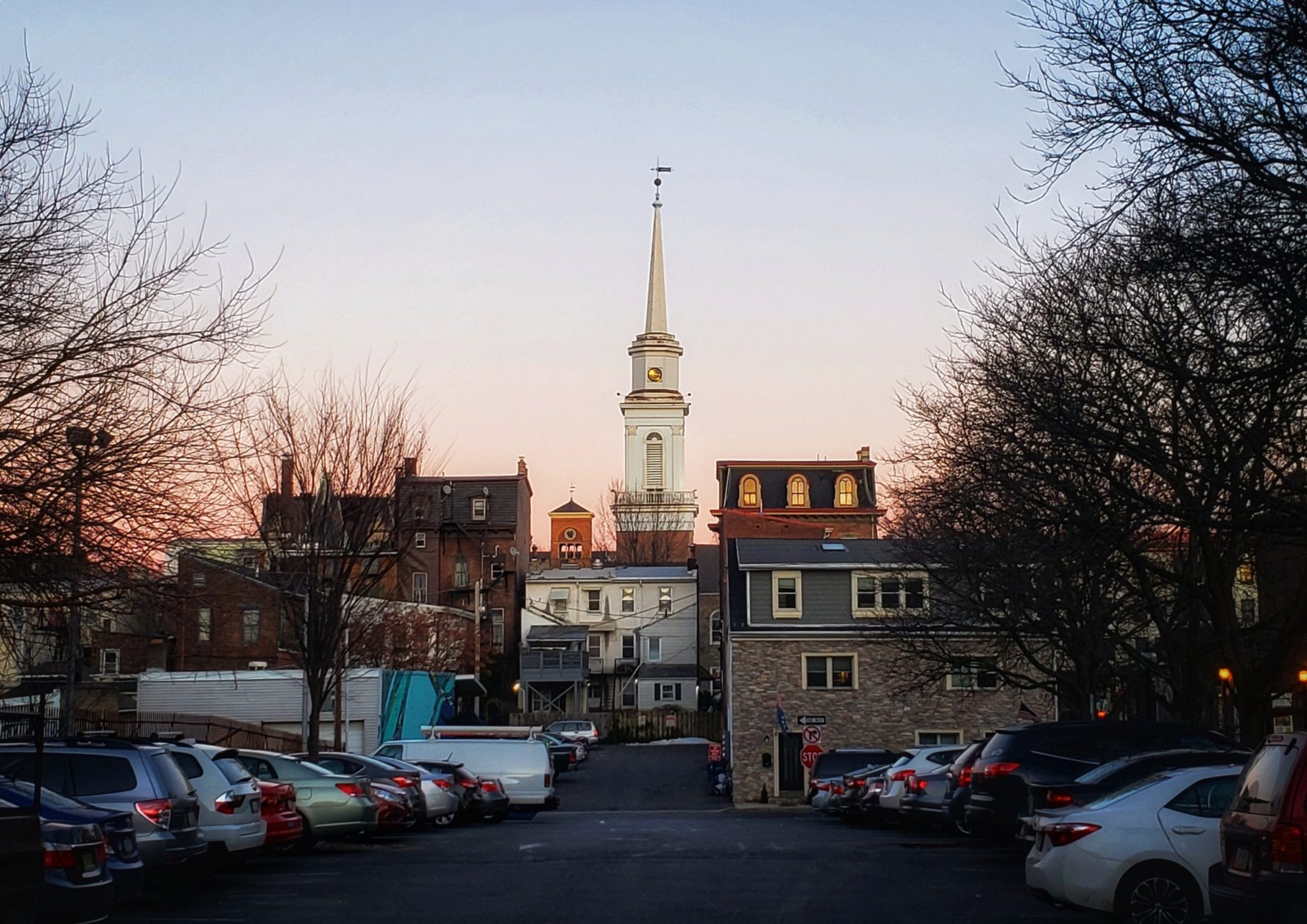 Thinking Outside The Blocks: by Antonia Mitman

In the past twelve months, many planning meetings have been held among Easton’s numerous elected and appointed officials and private investors. Normally that should lead to the right projects for our city. During this...

An Easton City Council Public Hearing on Wednesday, June 10, will attempt to bring some clarity to the City’s increasingly convoluted efforts to revise its zoning ordinance. Last November, the City proposed a new...